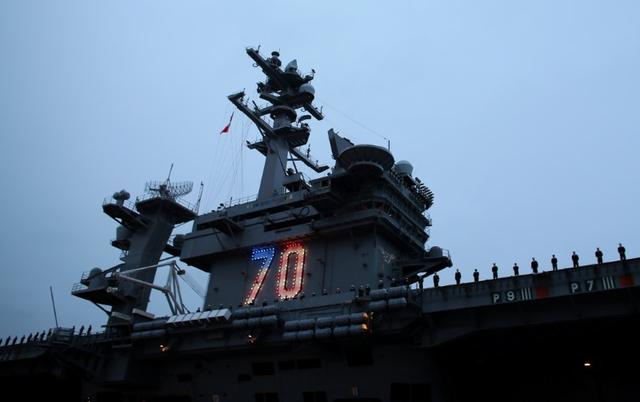 China’s defense ministry said on Thursday it was aware of the presence of a U.S. aircraft carrier strike group in the South China Sea and China respected freedom of navigation for all countries in the waters there.

The U.S. navy said the strike group, including the Nimitz-class aircraft carrier the USS Carl Vinson, began “routine operations” in the South China Sea on Saturday amid growing tension with China over control of the disputed waterway.

Defence ministry spokesman Ren Guoqiang said China had a “grasp” of the situation regarding the carrier group in the South China Sea.

“Of course, we also respect freedom of navigation and overflight for all countries in the South China Sea in accordance with international law,” he added.

The situation in the South China Sea was generally stable, Ren said.

“We hope the actions of the U.S. side can contribute positive energy towards this good situation, and not the opposite.”

Good military relations between the two countries are in interests of both, and well as of the region and the world, and China hoped the United States could meet China half way, strengthen communication and avoid misjudgment, Ren said.

Friction between the United States and China over trade and territory under U.S. President Donald Trump have increased concern that the South China Sea could become a flashpoint.

China wrapped up its own naval exercises in the South China Sea late last week. War games involving its only aircraft carrier have unnerved neighbors with which it has long had rival claims in the waters.

China lays claim to almost all of the resource-rich South China Sea, through which about $5 trillion worth of trade passes each year.

Brunei, Malaysia, the Philippines, Taiwan and Vietnam also claim parts of the waters that have rich fishing grounds, along with oil and gas deposits.

The United States has criticized China’s construction of man-made islands and build-up of military facilities in the sea, and expressed concern they could be used to restrict free of movement.