Kuwait could pay up to $60,000 for party at Trump Hotel in Washington 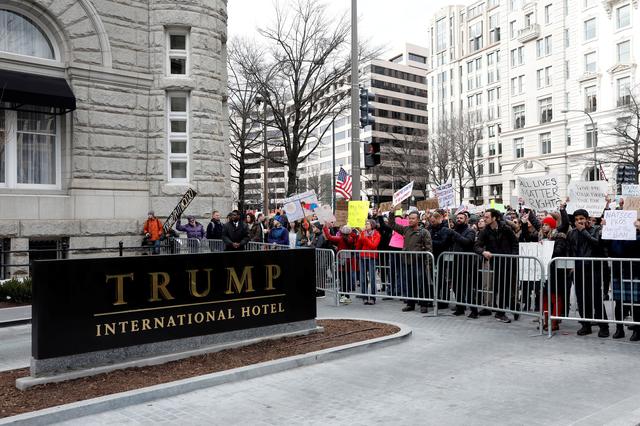 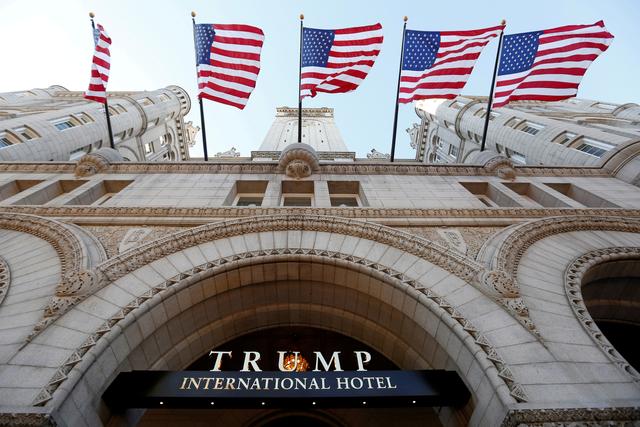 FILE PHOTO — Flags fly above the entrance to the new Trump International Hotel on its opening day in Washington, DC, U.S. September 12, 2016.

FILE PHOTO — Flags fly above the entrance to the new Trump International Hotel on its opening day in Washington, DC, U.S. September 12, 2016.

The Kuwaiti government could pay up to $60,000 to President Donald Trump’s hotel in Washington for a party it held on Wednesday in an early test of Trump’s promise to turn over profits from such events to the U.S. Treasury.

The Kuwait Embassy hosted an event to mark their National Day. Similar National Day celebrations at the Trump International Hotel for a crowd of several hundred can run from $40,000 to $60,000, according to cost estimates from the hotel seen by Reuters. The hotel declined to comment on the figures.

One of Trump’s lawyers, Sheri Dillon, pledged at a Jan. 11 press conference to donate any Trump Hotel profits from foreign governments to the U.S. Treasury.

The White House and Alan Garten, the general counsel for the Trump Organization, did not return calls for comment on whether any profits from foreign government payments to the hotel have been donated. Dillon’s firm declined to comment.

Kuwaiti Ambassador Salem al-Sabah told Reuters he was paying the Trump Hotel an amount similar to what he had paid the Four Seasons hotel to host a previous National Day event. He said on Wednesday before the event that he expected it to draw 500 or 600 people, but declined to disclose specific cost details.

The Four Seasons, which declined to comment, also charges prices in the $40,000 to $60,000 range for such events, according to cost estimates seen by Reuters.

A watchdog group led by former ethics lawyers for the Obama and George W. Bush administrations sued Trump in federal court in January, accusing him of violating the Constitution by allowing foreign government payments to businesses he owns.

Some ethics lawyers say even if Trump turns over all of the profits from the Kuwait National Day party, he would still be in violation of the U.S. Constitution, which prohibits government officials from accepting “any present, Emolument, Office, or Title, of any kind whatever, from any King, Prince, or foreign State.”

They say all of the income from the event, not just profits, would need to be donated to the U.S. Treasury to avoid contravening the constitutional ban.

Trump resigned in February as an officer of Trump Old Post Office LLC, the company that operates the hotel, but Richard Painter, Bush’s chief ethics lawyer, said the resignation made no difference as long as Trump retained an interest in it.

The ethics experts say Trump is still technically a recipient of payments to his hotels because he still has an ownership interest in them.

Dillon, Trump’s lawyer, argued at the Jan. 11 press conference that payments to Trump’s hotels do not violate the Constitution because “paying for a hotel room is not a gift or a present and it has nothing to do with an office.”

She also said that a separate law banning federal employees from engaging in matters affecting their financial interests does not apply to the president. The head of the U.S. Office of Government Ethics agreed in public remarks in January but said it was “consistent policy of the executive branch” for the president to nevertheless avoid financial conflicts of interest.

The office declined to comment when asked by Reuters whether Trump would be contravening the Constitution if he did not turn over all hotel income from foreign governments.

Four Democratic U.S. lawmakers asked the Government Accountability Office on Feb. 16 to assess whether Trump had made any payments to the Treasury resulting from profits at his hotels. GAO spokesman Chuck Young said the request was still being reviewed and the agency had not yet decided what to do about it.

When the House Oversight and Government Reform Committee was asked on Feb. 23 whether it would be tracking payments from foreign governments to Trump Hotels, and from the hotels to the U.S. Treasury, a spokeswoman for the committee declined to comment.