Goodness ἀγαθωσύνη (agathosune) means uprightness of heart and life, goodness, and kindness.  Goodness is seen in our actions. This word relates to not only being good but also doing good things.

The Contemporary English Version of 2 Thessalonians 1:11 highlights this meaning, “We pray for God’s power to help you do all the good things you hope to do and your faith makes you want to do.”  Through the Holy Spirit’s work in Christians’ lives, they are upright in heart, and they do good things.

“I’m good.” “It’s all good.” “Good news!” The word good is our default for anything vaguely positive. But what do we mean when we talk about goodness? Moreover, what does God mean by offering goodness as a fruit of the Spirit?

The Divine Goodness of Creation

When I think of the goodness, I think of the creation narrative in Genesis 1. The passage uses the word good seven times—a number that alludes to completeness or perfection throughout biblical literature. Light and dark, skies and seas, stars, fish, birds, and all the creatures of the land are each created to be completely, perfectly good.

Imagine God, like a homeowner at Christmas, hanging the wreaths, plugging in the lights, standing back with his triune family . . . “Then God saw everything that He had made, and indeed it was very good” (Genesis 1:31).

It’s a scene of complete awe.  That is how God perfected Himself.

Treating All of Creation with Divine Goodness

When you and I see everything that God has made—from snakes to sunsets, friends to foes—is it still a scene of complete awe? Hallelujah

But, as we invite the Holy Spirit to abide with us and bear fruit in us, the Spirit helps us see more and more of God, including the divine goodness of his creation. And, upon seeing his goodness, we respond by treating creation with divine goodness.

Goodness doesn’t mean naively calling everything good in the sense of “just” or “right,” because the Fall causes us to make choices that are downright not right. Rather, goodness means participating with God in the kingdom work of calling everything back to good.

Goodness whispers into the lives of a friend, stranger, or enemy alike: “You are fearfully and wonderfully made” (Psalm 139:14). And goodness longs for that whisper to echo throughout the person’s life and into their thoughts, feelings, and actions.

We have ample opportunity to practice these whispers of goodness in day-to-day life.

Is this what God thinks is good? No!

Let’s hear what Psalm 33:4-5: “For the word of the LORD is right, and all His work is done in truth. He loves righteousness and justice; the earth is full of the goodness of the LORD”.

God wants the earth to be full of His goodness. Whatever, He considers good is clearly spelt out in the Bible. However, since the creation of Adam and Eve, humanity under Satan’s influence has chosen to come up with its own definition of goodness.

Think about some of the other words associated with goodness in the Bible, such as truth, righteousness, justice and light. Ephesians 5:8-10 uses some of these synonyms: “For you were once darkness, but now you are light in the Lord. Walk as children of light (for the fruit of the Spirit is in all goodness, righteousness, and truth), finding out what is acceptable to the Lord.”

Most people decide what is right and wrong not based on what God has taught us, but on whatever mood, feeling or biased “research” they’ve experienced on the matter.

Psalm 52:1 tells us that “the goodness of God endures continually.” What is that goodness? It includes an absolute commitment to good over evil and right over wrong. The fruit of the Spirit of goodness mentioned in Galatians 5:22 also includes generously doing good to others. 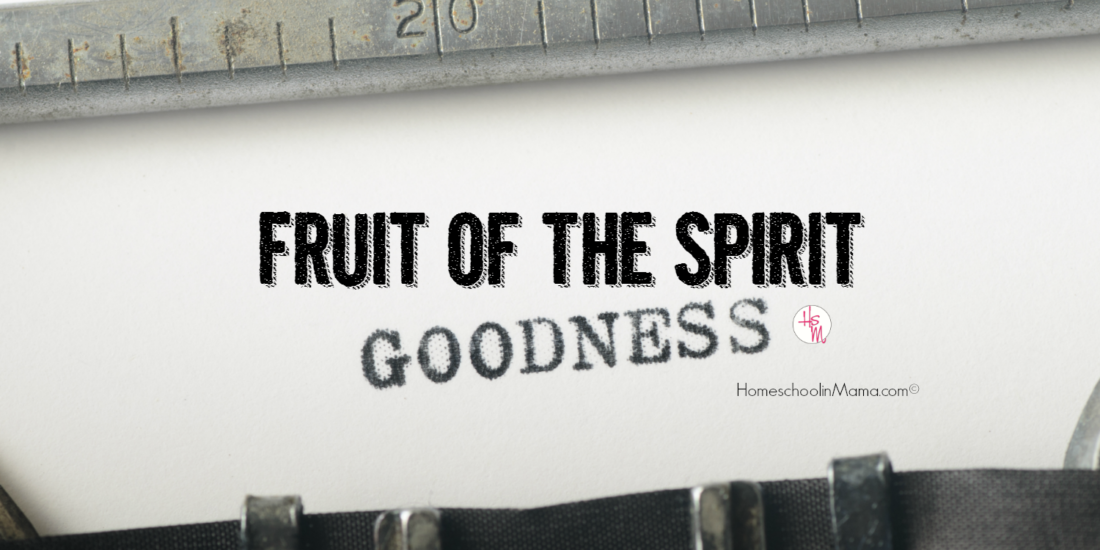 Why does God want us to demonstrate goodness?

God is good, and He wants us to grow in the fruit of goodness so we can be like Him.

A phrase that is repeated several times in Psalm 107 reads: “Oh, that men would give thanks to the LORD for His goodness, and for His wonderful works to the children of men!” The rest of the psalm mentions many aspects of God’s goodness, such as He delivered His people from distress and afflictions brought on by their sins and He led them the right way (verses 6-8).

Our goodness should be something that other human beings can be thankful for, just as we are thankful for the amazing goodness God has shown to us.

What is the alternative? What is the opposite of goodness? What happens when we decide what is right or wrong based on the values of a world twisted by the devil who hates us?

John 8:44 tells us that Satan “was a murderer from the beginning, and does not stand in the truth, because there is no truth in him. When he speaks a lie, he speaks from his own resources, for he is a liar and the father of it.”

Do we really think the father of lies is going to tell the world what it really means to be “good”? Not likely. As an example, Satan lied to Adam and Eve, convincing them that they would benefit by eating from the tree of the knowledge of good and evil. And to this day, the world has been influenced by the devil’s deceptions concerning what is good and what is evil.

God wants us to demonstrate His goodness based on His commandments, based on His character. Deuteronomy 6:24 reveals that “the LORD commanded us to observe all these statutes, to fear the LORD our God, for our good always, that He might preserve us alive, as it is this day.”

God knows what is best for us because He created “good.” We must continue in God’s goodness that He has shown toward us if we are to avoid being cut off from a coming kingdom defined by goodness (Romans 11:22).

Why does God want us to demonstrate goodness? Because it is good for us and good for those around us. We are to be a light showing what is truly moral—the beneficial commandments and righteousness of God.

Ultimately, God wants us to show goodness because He is good, and He wants us to be like Him—and to be His children forever (Romans 8:16-17)!

Two kings of Judah are specifically mentioned as having “goodness.”

The first king—Hezekiah, whose story is found in 2 Chronicles 29 through 32—inherited the kingdom from a very wicked ruler: his father. As soon as he began to reign, Hezekiah cleansed the temple from all the neglect and contempt that had been shown to it, restoring the true worship of God. He also kept the Passover festival, another neglected commandment of God.

Then Hezekiah systematically got rid of all the horrific pagan influences in the land. He also stood up to the most powerful king at that time, Sennacherib of Assyria, who had mocked God and everything He had told His people.

“Good” King Josiah (whose story is found in 2 Chronicles 34 and 35) followed the same pattern as Hezekiah. He inherited the kingdom after two very wicked kings destroyed what Hezekiah had put in place. Josiah purged the land again of all the terrible pagan practices. He also found the Book of the Law and became determined to follow it closely. As with Hezekiah, he restored true temple worship and prepared a very memorable Passover.

The examples of these two kings show us that even if all the influences around us (even inside our own families) are not “good,” we can still show goodness by clinging to God’s standards.

An example to avoid

So what happened between the reigns of Hezekiah and Josiah? Why did Josiah basically have to redo everything Hezekiah had done?

Unfortunately, Hezekiah’s son Manasseh (whose story is found in 2 Chronicles 33) was not known for his goodness. Although Manasseh repented at the end of his life, for many years he did irreparable damage and evil in the land. He brought back all the disgusting pagan influences and practices to the land, including child sacrifice, sorcery, witchcraft and the occult. The other nations in the area thought these practices were normal and good, but God hated them.

Manasseh even went so far as to build a pagan altar in God’s temple! Manasseh’s son Amon also encouraged these evil practices when he became king.

These examples may seem extreme, but Manasseh was simply doing what everyone else around him was doing. However, by following others’ definitions of right and wrong, he was seducing Judah to do evil (verse 9), which is the opposite of God’s standard of goodness.

We must evaluate this world’s ideas of “good,” and then think about Isaiah 5:20: “Woe to those who call evil good, and good evil; who put darkness for light, and light for darkness.” 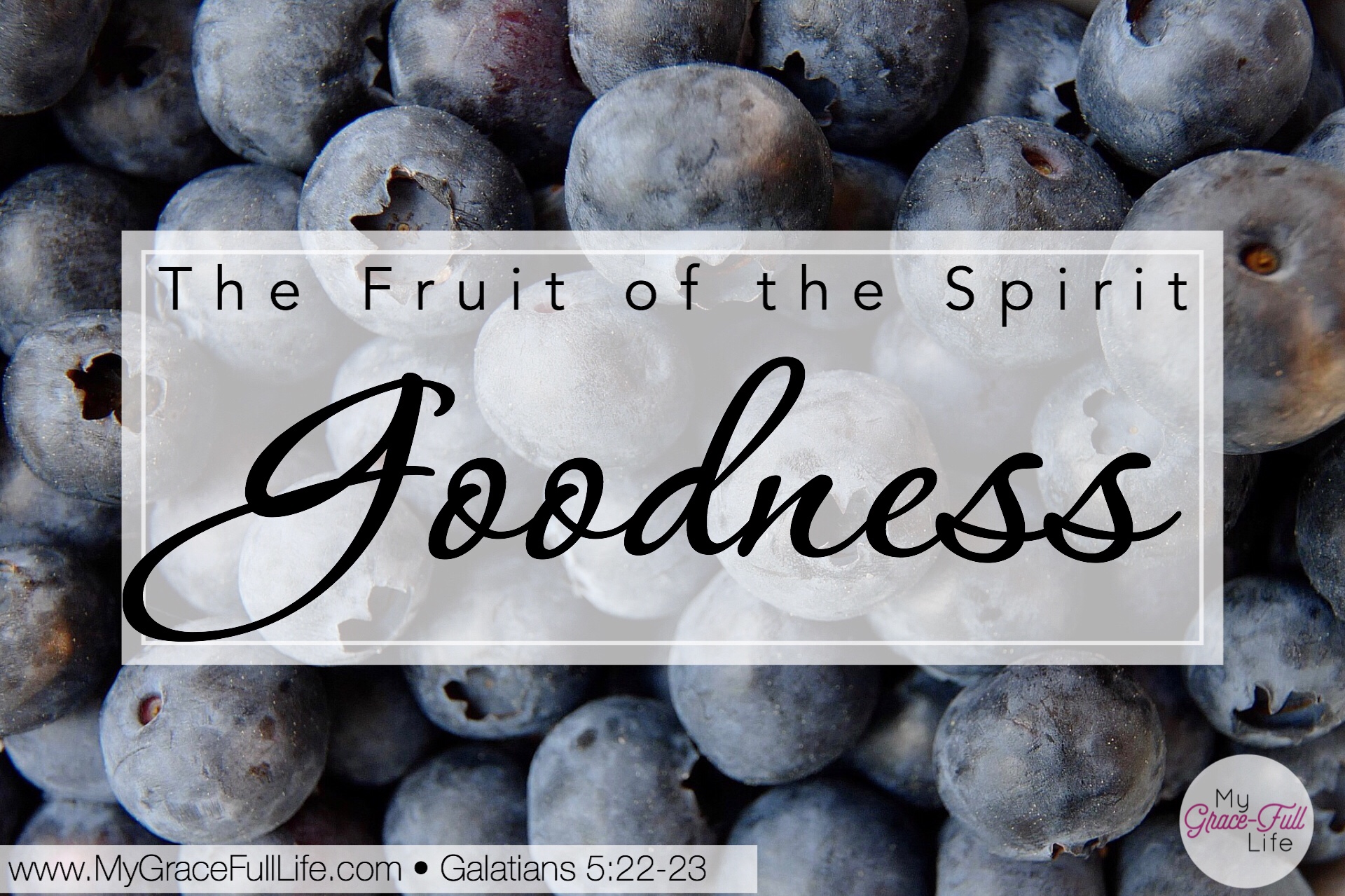 Jesus Christ, our perfect example for all the different fruit of the Spirit, was the model and definition of goodness demonstrated by a human being. Now, no longer human, He sits at the throne of God eager to help us in our lives. Let us all use His example and help to strive to truly grow in the fruit of goodness.