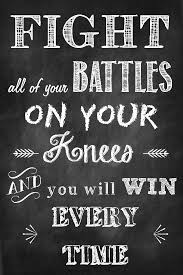 As the apostle, Paul said when he was strengthening and encouraging the church, he had this message for the church. “We must through many tribulations enter the kingdom of God.” — Acts 14:22

The battle is not won on the sidelines. It is won on the field. Each one of us is called to take the field and establish the kingdom. This only happens through PUSH (Prayer Until Something Happens) kind of prayer. It must be forceful, focused, and effective prayer. We push to see the kingdom come first in our own hearts and lives. Then it flows into our families, our communities, and throughout the world in which we live.

Because the kingdom of darkness really exists, spiritual warfare will be encountered. But fear not, for greater is He who is in you than he who is in the world. — 1 John 4:4

Prayer is the weaponry we have been given to push back the powers of darkness and thwart their wicked agenda. Through the medium of prayer we are able to rise triumphantly in each and every circumstance:

Now thanks are to God who always leads us in triumph in Christ, and through us diffuses the fragrance of His knowledge in every place. — 2 Corinthians 2:14

Many would prefer to believe that prayer is nice but not necessary, much like sequins on a motorcycle helmet. So many see prayer as a nonchalant activity rather than powerful productivity, as incidental as opposed to intentional, kind of an “In case of emergency break glass” approach when it comes to prayer.

Yet Jesus “often withdrew into the wilderness and prayed” (Luke 5:16). It is the only thing the Bible mentions Jesus doing “often.” With just three years of public ministry from His launch to His crucifixion, the clock was ticking, and He didn’t have a whole lot of free time to kill. He prayed in solitary places often because it was the most productive activity for Him to engage in, fueling and clarifying all that He did.